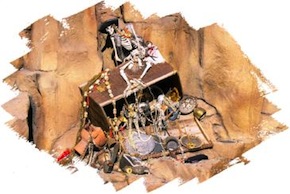 A long, long time ago in a kingdom far, far away lived an efficiently-functioning secondary market.

With everyone living the good life, serfs became convinced they could live like royalty. They started buying up castles, cottages, and McMansions they couldn’t afford. One day, an evil recession swept through the land, laying waste to everything in its path.

The values of aforesaid castles, cottages, and McMansions plunged and delinquencies soared. Gone were the five-digit commissions, the large institutional investors, and broker incentive programs. A dark pall was cast throughout the kingdom, and many brokers shuffled their battered bodies with their shattered spirits and set off for greener pastures.

Some of those that stayed behind saw opportunity through the veil of bleakness. A new day dawned when they recognized one man’s trash is truly another man’s treasure. That treasure took the form of non-performing notes and REO (Real Estate Owned).

A couple years ago, as my business partner and I watched our closing percentages on performing notes plunge month after month, we figured there had to be a better way to work the market. We would bid 100 notes to sign up ten: We would only close one or two of those ten. Values wouldn’t hold, credit was worsening nationwide, and investors were skittish about buying new notes when those already in their portfolio were losing value daily.

Gradually, we began to see the mass liquidation-in-process all around us. Banks and mortgage companies were dumping their delinquent loans and REO, trying to clear their balance sheets of all that trash. But it wasn’t trash to us – instead, we felt we had found hidden treasure.

We partnered with an end buyer of REO and non-performing loans/notes, and set out on our new jobs as ‘trash collectors’. Our closing percentages shot up to levels higher than even performing notes in the best years, and based on the current backlog of defaulted loans/notes nationwide, there is no end in sight.

Since this country is full of ‘experts’ who will tell you all about how to buy non-performing notes and REO but fall strangely silent when asked to detail a specific transaction they’ve purchased (um, that would be because they have no experience actually DOING the business), allow me to summarize a deal we purchased last month:

The seller is a mortgage company in the western United States. They had a first and second lien on a property in the south. Although the property today is only worth about $25,000, the borrower owes substantially more than that between the two loans. On the spreadsheet provided at the time of our bid, we learned the borrower was four months delinquent. Knowing this, we factored in our costs to foreclose and submitted a low bid for the loans.

Surprisingly, our offer was accepted. Even more surprisingly, the pay history provided for our due diligence showed the borrower was making double payments each month in an effort to catch up. In fact, the borrower had been ten months delinquent just a few months ago, but was steadily chipping away at the arrearage. What in the world was this company thinking by selling for so little if the borrower was fervently trying to reinstate the loans? If the trend continues, the borrower will be current in another four months, and we will have recovered every penny of our investment! All payments received after that will be pure profit for us.

I have already spoken to the borrower and confirmed she is determined to keep the property and bring her loans current. I have also dangled the carrot that if she can bring the loans current in that timeframe (four months), we will discuss modifying the terms of her loans (possibly consolidating the first and second) and offer her far more attractive terms.

Why didn’t the seller do something proactive like this rather than take the financial hit? The possible reasons are numerous: They are too large and inefficient to tailor-make a repayment solution, they are staffed with people who don’t know how to think outside the box, they are being pressured by management to rid their books of toxic assets, etc. My point is that you (yes, YOU) can take advantage of their lack of creativity and thrive, offering solutions that are beneficial not only to you but the borrowers as well.

The ‘Great Recession’ closed many doors of opportunity, and the dragons of high finance left the securitization market a devastating conflagration. From the ashes, we have found hope. We really can live happily ever after, even in times like these.

In my own fairytale childhood, I never once responded “trash collector” when asked what I wanted to be when I grew up. But a treasure hunter? ABSOLUTELY!

About the Author: Clint Hinman is the President of Proficient Note Buyers LLC, a buyer and broker of non-performing notes/loans and REO. With over 17 years of experience in real estate-related cash flows, Clint is part investor, part broker, part consultant, and part plain nuts. Contact him at clint@pronotebuyers.com or visit his website at www.pronotebuyers.com