Ever wonder why note buyers are such sticklers for requiring proof the property is insured against fire or other hazards? Well have I got a story for you…

Pulled from the archives, this Burn to Learn war story seems timely.  Why? There seems to be an influx of deals recently where property insurance is holding up closing. Nothing is a better teacher than real life experience, but perhaps I can spare you from getting burned. 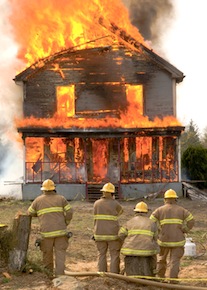 The Note and Trust Deed Investment

It was a 1940s bungalow style home in a small Oregon town that was occupied by the buyer. The payer had very poor credit and medical collections however; a strong verifiable pay history and a fair amount of equity offset credit. Here’s a quick recap:

Our offer of $31,250 was accepted and we proceeded using standard due diligence procedures. We reviewed copies of documents, a title commitment, the pay history/account verification from the third-party servicing agent and a new appraisal reflecting good property condition and known value increases for the area resulting in a fair market value of $60,000 (back when that sort of appreciation was the norm). We prepared for closing and required standard proof of hazard insurance. The seller returned the document package along with the insurance information. We called to verify coverage, which was verbally confirmed by the agent, and we authorized the wire transfer to the seller.

Now it gets interesting.

On the day the wire transfer was authorized at the bank (a Friday) we received a return call from the insurance company stating they were in error and due to non-payment the hazard insurance policy was no longer in effect. This was brought to my attention by our closer and we attempted to contact the buyer but were not immediately successful.

During my 10 years of corporate experience and at that time two years of personal investment experience, I had seen thousands of accounts purchased without insurance verification and felt the risk was nominal. I decided to proceed and did not pull the wire at the bank. We sent the standard letter to the buyer to clarify the insurance issue and planned to force place insurance if sufficient proof was not provided.

Things seemed in order until we were contacted by an adjoining property owner the next week making a $10,000 “as-is” offer to purchase the “lot” next to their $250,000 home.

Guess what? The house on which we had purchased the note burned down over the weekend and we were left with nothing more than a lot, a shell of a building, and debris as security.

We called the fire department (to verify the date of the fire and the condition of the property), ordered a property inspection, contacted the appraiser to obtain a land only value ($24,000 – $29,000), and traced the buyer whose home phone was no longer in operation.

Once we made contact with the buyer we confirmed our fears finding he did not have insurance as the insurance premium money had been used to purchase prescriptions for his recently deceased wife who did not have health insurance coverage during her fight with cancer. He was a self-employed car mechanic and his income was currently down. It was a sad situation and initially the buyer seemed cooperative and wanted to continue payments until he could sort out his financial affairs. He was interested in placing a mobile home on the lot and hoped we would help finance it. We were happy to explore the possibility and asked for a show of good faith in the form of current payments during the interim. Unfortunately the buyer’s financial situation declined, payments were never received and we ended up holding a Deed in Lieu of Foreclosure which we waited to exercise until we knew our final course of action. We attempted to sell the lot but realized most new building activity was being done on small tracts of land outside the city limits.

Will that be a single or a double?

The neighbor was a local businessman who owned a nicer home in this small bedroom community of mixed homes. He was unhappy with the condition of his neighboring lot and increased his offer from $10,000 – $15,000. We explained it was appraised for $24,000 – $29,000 and were not ready to take such a loss but did offer owner financing if we came to an agreeable price. He did not desire financing and was concerned over the view.

Understanding his motivation, we explained we were considering the placement of a used single wide mobile home on the lot (1969 or newer according to zoning requirements) which we would offer to a new buyer with owner financing if we were unable to sell the property as a lot. We waited (or I should say sweated) the situation out and the neighbor offered a cash purchase price of $23,000 provided the lot was cleaned. Initial estimates for clearing the lot had come between $5,000 to $7,000.

We contacted the fire department regarding their “Burn to Learn” program. The fire department agreed to arrange a practice drill on the property resulting in a complete burn of the remaining structure and approximately 95% of the debris. The remaining debris could be hauled away at a nominal expense. We accepted the neighbor’s offer resulting in a loss after expenses of approximately $10,000. The transaction closed and I was never so relieved to have lost “only” $10,000.

So, what did we learn moving from note brokering to note buying?

1. Don’t be rushed or pressured into making investment decisions

2. Perform a verbal debt verification or payer estoppel with the purchaser even if the account is serviced through a third party servicer.

3. Require current insurance at closing even if the seller has to pay and obtain insurance on the buyer’s behalf from the note proceeds.

If you think this sort of situation is a once in a lifetime bout of bad luck then think again.  A few years later we were ready to fund on an Alabama note that had a current insurance declaration page in the file. Upon calling the insurance company we found the buyer had not kept their premiums current and coverage had lapsed. We delayed the closing and required proof of current insurance prior to funding.

We called to follow-up several days later only to be told the house had burned down the night before!

It was another sad story but a good reminder of why investors require proof of insurance coverage at closing and during the life of the account.

Wondering How to Buy Mortgage Notes? We share the good, bad, and the ugly in our Finding Cash Flow Notes Online Training.