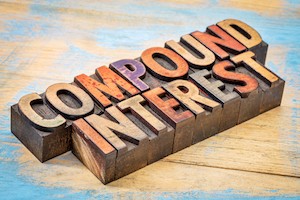 Do you live by this note investing creed?

“The most powerful force in the universe is compound interest.”

“Compound Interest is the 8th wonder of the world. He who understands it, earns it. He who doesn’t… pays it.”

Albert Einstein is credited with these words of wisdom that have rightfully earned their worth as the investor’s mantra. While CBS news, Snopes, and academics debate whether Einstein actually authored the compounding interest quotes, there is no questioning the life altering power behind these words – regardless of their origin!

Now I’m going to add a quote that I can confidently say is an original:

“Interest on investments is like frosting on cake. But compounding interest is the cake and frosting WITH sprinkles and birthday candles!” – Tracy Z

Let’s start with a look at simple interest…

Simple Interest Is Interest On Principal

Pretty straight forward but what happens in 10 years?

The table below shows how simple interest accrues (or adds up) over ten years.

So you could double your money in ten years when earning 10% all from the power of interest.

Not bad but it gets better…

Compound Interest Is Earned On Principal AND Interest

The Interest earned is added to the Principal each year.

The second year the calculation is $11,000 x .10 equaling $1,100 earned. And every year thereafter that higher amount of interest is added back to the principal compounding the effect.

So what happens in 10 years? Take a look at the chart below to see how that one simple change drastically impacts the outcome.

(*plus or minus a penny due to rounding )

It was the same $10,000 Investment at the same 10% Interest Rate. The only change was how the interest earned was handled at the end of the year.

Was it accrued separately (simple interest) or added back to the principal (compound interest)?

That one simple difference is the power of compounding interest!

If you can shorten the time between the interest being added back to the principal (aka the compounding period) you have even better results. Instead of waiting a whole year to add back the interest what would happen if you did it every 3 months or even monthly?

So where can an average person find an investment vehicle that has the potential to earn 10% using a monthly compounding period? Of course that’s a rhetorical question because you are already reading this article on NoteInvestor.com.

Financial calculators let you set the compounding period and most note investors use a monthly compounding period to determine a purchase price at their desired return or yield. The examples show what a big difference this can make which is why we spend time in the Calculating Cash Flows tutorials going through how to adjust these settings on the HP12C and in the TValue™ Amortization software.

The banks and wealthy have been capitalizing on compounding interest for centuries. Sadly, the average American is a slave to paying interest (on their cars, credit cards, student loans, and homes). Making the shift to earning interest instead of paying it is a monumental step in living debt free and securing financial freedom. 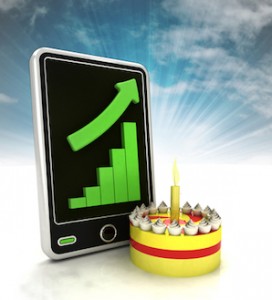 So What Does This Have to Do With My Quote About Cake?

Remember when you were a kid? You would get pretty excited about cake right? – Especially cake with frosting!

But what made it really special once a year when your birthday rolled around? It was definitely the confetti sprinkles and candles on top.

When you closed your eyes, made a wish, and blew out the birthday candles with one big breath – anything was possible.

As an adult that is how I feel about note investing. It is a delicious frosted cake and with compounding interest it becomes birthday cake with candles – and anything is possible with that kind of power behind you!

You don’t need the IQ of Einstein, a financial degree, or even a love of math to master the concept. Start with a free compounding interest calculator or join me in the How To Calculate Cash Flows training for some step by step tutorials. Whether it’s one small note or a whole portfolio, I invite you to experience the power of compounding interest in your own life.